Elliott Wave Principle Now and Then

The Elliott Wave Principle is a form of technical analysis that is used by some traders to analyze cycles in financial markets and based on that forecast the future path by identifying extremes in investor psychology, highs and lows in prices, and other collective factors.

Ralph Nelson Elliott (1871–1948), a professional accountant, discovered the underlying social principles and developed the analytical tools in the 1930s. He proposed that market prices unfold in specific patterns, which is today called Elliott waves or simply waves by practitioners of the wave theory. Elliott published his theory of market behavior in the book The Wave Principle in 1938, summarized it in a series of articles in Financial World magazine in 1939, and covered it most comprehensively in his final major work, Nature’s Laws: The Secret of the Universe in 1946. Elliott stated that “because man is subject to rhythmical procedure, calculations having to do with his activities can be projected far into the future with a justification and certainty heretofore unattainable

The Elliott Wave Principle posits that collective investor psychology, or crowd psychology, moves between 2 extremes i.e. optimism and pessimism in natural sequences. These mood swings create patterns which can be viewed in the price movements of markets at every degree of trend or time scale. In Elliott’s model, market prices alternate between an impulsive, or motive phase, and a corrective phase on all degrees of the trend. Impulsive waves are always subdivided into a set of 5 lower-degree waves, which are again sub-divided between motive and corrective wave so that waves 1, 3, and 5 of a motive wave are impulses, and waves 2 and 4 of a motive waves are corrective i.e. they are corrections of waves 1 and 3 respectively. Corrective waves subdivide into 3 smaller-degree waves starting with a five-wave counter-trend impulse, a retrace, and another impulse. In a bear market the dominant trend is downward, so the pattern is reversed—five waves down and three up. Motive waves always move with the trend, while corrective waves move against it.

In today’s world, market behavior is no longer based on psychology as it used to be in the past. Market is now ruled by computers also known as algo’s or algorithms. Computers don’t have emotions, don’t think or react like humans. They trade based on a code (set of precise rules) and often we see cycles ending at exact 50% Fibonacci retracement or equality targets which means there is either a very high percentage of traders buying or selling at these levels or there is few very powerful buyers / sellers appearing at these levels which results in cycles ending. There are many different types of technical analysis techniques so it wouldn’t take a genius to figure out that it’s practically impossible to have a very high percentage of traders buying or selling at the same levels. It is really the few very powerful buyers / sellers who have the capacity to do this. Many call them smart money; we call them the Market marker who has nothing to do with the market psychology, crowd behavior or collective thinking and has more to do with the technicals and code that they follow.

As a trader with a huge back ground in Mathematics, I always loved the idea that the Market follows patterns, more like following a map which can be created or drawn using the Elliott Wave Principle. I started using Elliott Wave and fell in love with the Idea of the patterns repeating themselves and how it all made sense when I was able to identify ABC , WXY ,Triangles and Motive waves. After years of practicing Elliott Wave Principle, I figured that Principle was very subjective and there was something missing. For example, when I saw a 5 wave move, I thought a new trend was coming in to later find out that 5 wave move was part of a FLAT correction and I thought there must be something that I could look at validate or invalidate Elliott wave patterns  / structures.

I founded www.elliottwave-forecast.com and started updating a lot of instrument in the Daily basis and started observing how the original Principle was lacking an update. We keep changing the operating system in our computers, laptops, tables every 2-3 years because if we don’t, we will be left behind. Similarly, cars manufactured today are not the same as the ones built in 1930’s. When everything else has been improved / adjusted to the current times, then why no one thought of adjusting the Elliott Wave Principle of 1930’s to the way the markets operate today. After years of research and studying the current market behavior, we took the liberty to add 18 new rules on top of the original set of rules. We don’t mean no disrespect to the original work done Mr R.N. Elliott and all we have done is updated the Principle to make it more relevant to today’s markets to avoid the flaws created by using simple set of 3 rules.  For example,

We don’t label a triangle unless the momentum indicators also show contraction just like price.

However, sideways consolidation broke lower instead of breaking higher. Let’s now take a look at the same chart with RSI study on it and see how RSI invalidated the triangle at an early stage and we didn’t fall in to this trap 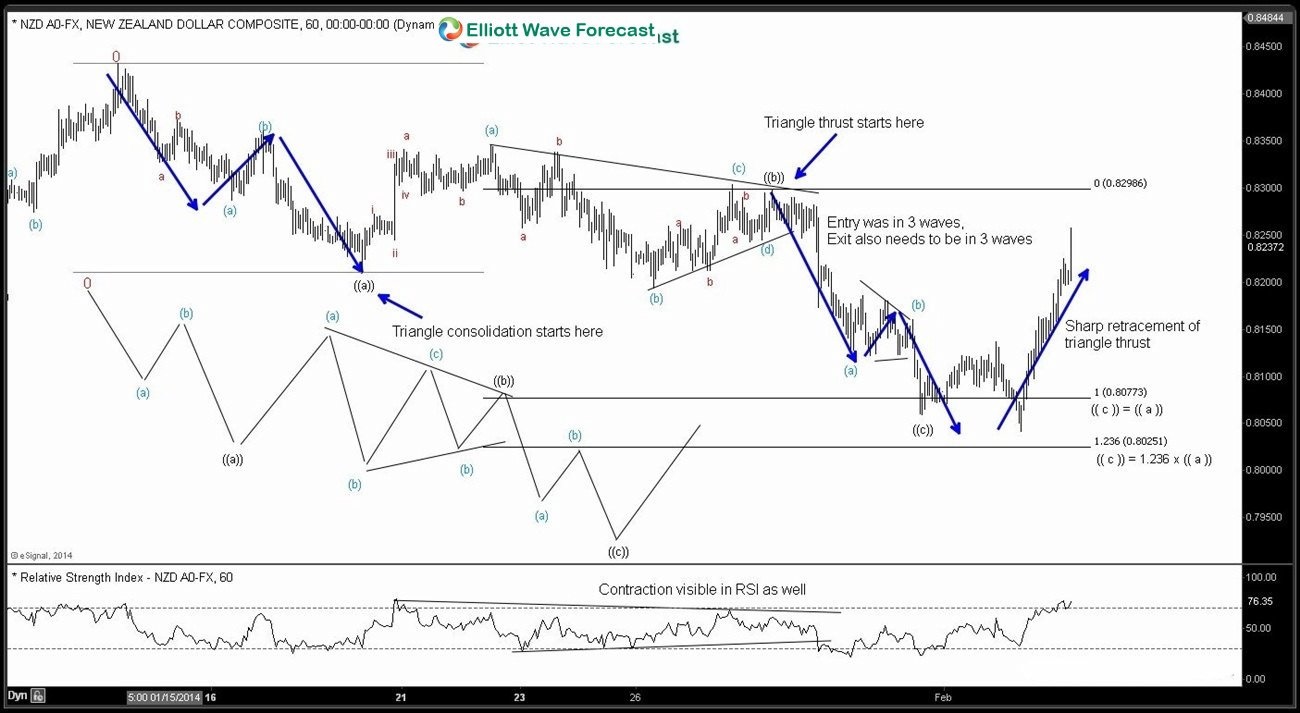 Now, let’s take a look at the Daily chart of GBPAUD pair to see how a 5 wave move with RSI divergence provided an extension in 5 waves

Now we will take a look at 5 wave looking move with and without RSI study on the chart. We will use the recent CL_F price action from 7.15.2014 low for this purpose

Mr. Elliott didn’t have the luxury to look at RSI or CCI to gather crucial information but we do and it’s imperative that we make use of the tools available to us and not keep labeling and trading the way it was done back in 1930’s.

Majority wavers believe that markets trend in 5 waves and correct in 3 waves and Elliott Wave Principle is mostly about spotting a 5 wave move and then trading the next leg after 3 waves pull back. Reality is that 90% of the times, the Market moves in 3 waves regardless of whether it is correcting or trending.  Majority of the times, a 5 waves move become an ABC (5-3-5) and this is a reality, not an illusion. So how does one differentiate between a trending market and a market which is in a correction if both are going to be in 3 wave sequences. We at www.elliottwave-forecast.com  have created a system of pivots through which we identify the ruling cycle and the trend and as far as the ruling pivot remains intact, we treat pull backs to be corrective. We also follow the swing sequence to differentiate between an impulsive (5 wave) and a corrective structure. Knowing the sequence in which the market is moving and the number of swings needed to complete the cycle/structure helps us stay on right side of the market. We have added these sequences to the 18 rules of the New Elliott Wave Principle and it works beautifully to avoid being caught on wrong side of the market, not falling in traps of FLATs etc. Fellow traders understand that the Market has changed and consequently the way we trade and there is need to upgrade the Principle to keep it alive. In general, The Elliott Wave Principle is a great tool but cannot be used by itself or like in 1930’s,it needs to be upgraded and be used as part of a system  to make it work. We give a lot of respect and credit to Mr. R.N Elliott for a great job and discovery in 1930’s but traders and investors of today need to understand the need to improve and upgrade the Principle to get high quality forecasting. www.elliottwave-forecast.com  follows the simple path or trend of the Human nature i.e. upgrading and discovering new things, living in the present and not in the past.