The Organization of the Petroleum Exporting Countries (OPEC) will meet in Vienna next week to discuss potential reduction or revision to the 1.8 million barrels/day production cut put in place in early 2017. After yearlong rise in oil and gasoline price, there’s a call to control the price from rising too far and too fast. Interestingly, the loudest call comes from the United States.

Ahead of the congressional elections in November in the United States, President Donald Trump wants crude price to be lower. In fact, he tweeted twice specifically targetting OPEC. His first tweet was in April

Then yesterday Mr. Trump again criticize OPEC publicly in social media despite oil prices having stabilized since his first tweet in April. The rise in Oil price is due to the production cut in past few years by OPEC. However, most OPEC members are not able to increase production at this stage due to lack of investment and sanctions. Iran and Venezuela production for example continue to dwindle due to US sanctions. Venezuela’s oil exports are falling by tens of thousands of barrels every month while Iranian exports can fall by 200,000 and a million barrels a day by next year.

Oil’s market report for the month of June by EIA and Opec showing a stable demand growth while Non-Opec supply growth increased a bit.

Saudi Arabia and Russia seem to have agreed to export more oil to bolster the country’s economy, to the detriment of fellow Opec members such as Iran, Venezuela who want higher oil prices. The WTI has fallen back from $72.83 to $64 partly as a result of market expectation that OPEC will increase the production in the second half of the year.  However, non-OPEC supply (mostly U.S. shale) is expected to grow as well. EIA expects oil demand to grow by 1.4 million barrels/day and non-OPEC supply will grow by 2 million barrels/day. With potential 1 million barrels/day addition by OPEC, the market looks to be well supplied until next year. These factors could help pressure and cap the price of Oil in 2018.

On the other hand, there are also factors which could be positive for Oil prices. Several OPEC countries are not able to increase the production. Venezuela experiences severe production outage, and already lost 350,000 barrels / day this year with the decline accelerating. Iran on the other hand can lose 500,000 to 1 million barrels / day supply because of U.S. sanctions. Thus, although Saudi Arabia and Russia might decide increase the output, the higher production might not offset the disruptions. 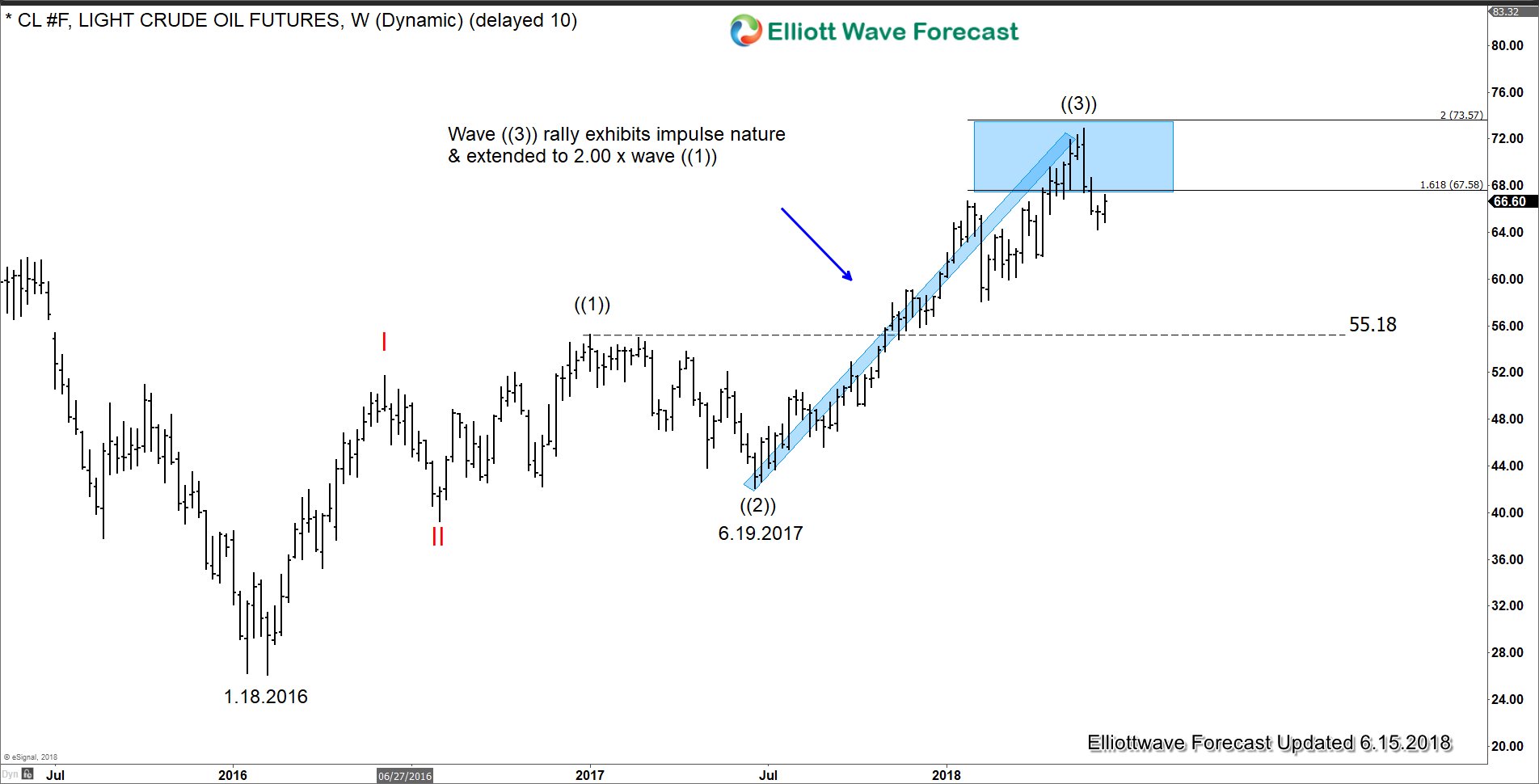 Oil (CL_F) rally from 6.9.2017 low exhibits an impulsive behavior with extension, which is typical characteristic of wave ((3)).  In the proposed count above, the entire rally from 1.18.2016 low is unfolding as an impulse in which we are within cycle degree wave III. Cycle degree wave III has an internal subdivision of Impulse structure in lesser Primary degree. If this interpretation is correct, then Primary wave ((4)) pullback can’t overlap with Primary wave ((1)), which means as far as the pullback stays above $55.18, Oil can extend the rally higher.

For more analysis on Oil and other 78 instrument, welcome to check our work and join Free 14 days Trial to get access to Elliott Wave Forecast for 78 instrument, Live Trading Room, Live Session, and more.