After 5 months of correction, Gold found strength again and hit more than three-month high on Tuesday. The move higher comes on the expectation that the U.S. Federal Reserve would cut interest rate to offset the U.S – China trade war. Recent commentary by the Fed governors and Chair hinted the willingness to do a rate cut. Yesterday we have James Bullard talking about a rate cut. Today, the Fed chair also confirms his dovish view and said the Fed will act as appropriate to sustain the expansion.

Mr. Powell also mentions that the Fed is closely monitoring the implications of trade negotiation for the US economic outlook. He also suggested that the Fed likely will use unconventional tools such as Quantitative Easing (QE) and ZIRP (Zero Interest Rate Policy) again in the future. He further said that it’s perhaps time to call these tools as conventional.

Lower interest rate reduces the opportunity cost of holding Gold. The yellow metal also benefits from risk off sentiment in the market as safe haven asset. With the United States opening trade war with China and Mexico, there’s plenty of concern in the market about the future global growth. Furthermore, recent U.S ISM manufacturing data for May hits the lowest level since October 2016 amid escalating global trade tension. Signifying the flight to safety, speculators increased their net long positions in COMEX gold in the week to 28 May. Holdings in SPDR Gold Trust also rose 0.3% to 43.21 tonnes on Friday. 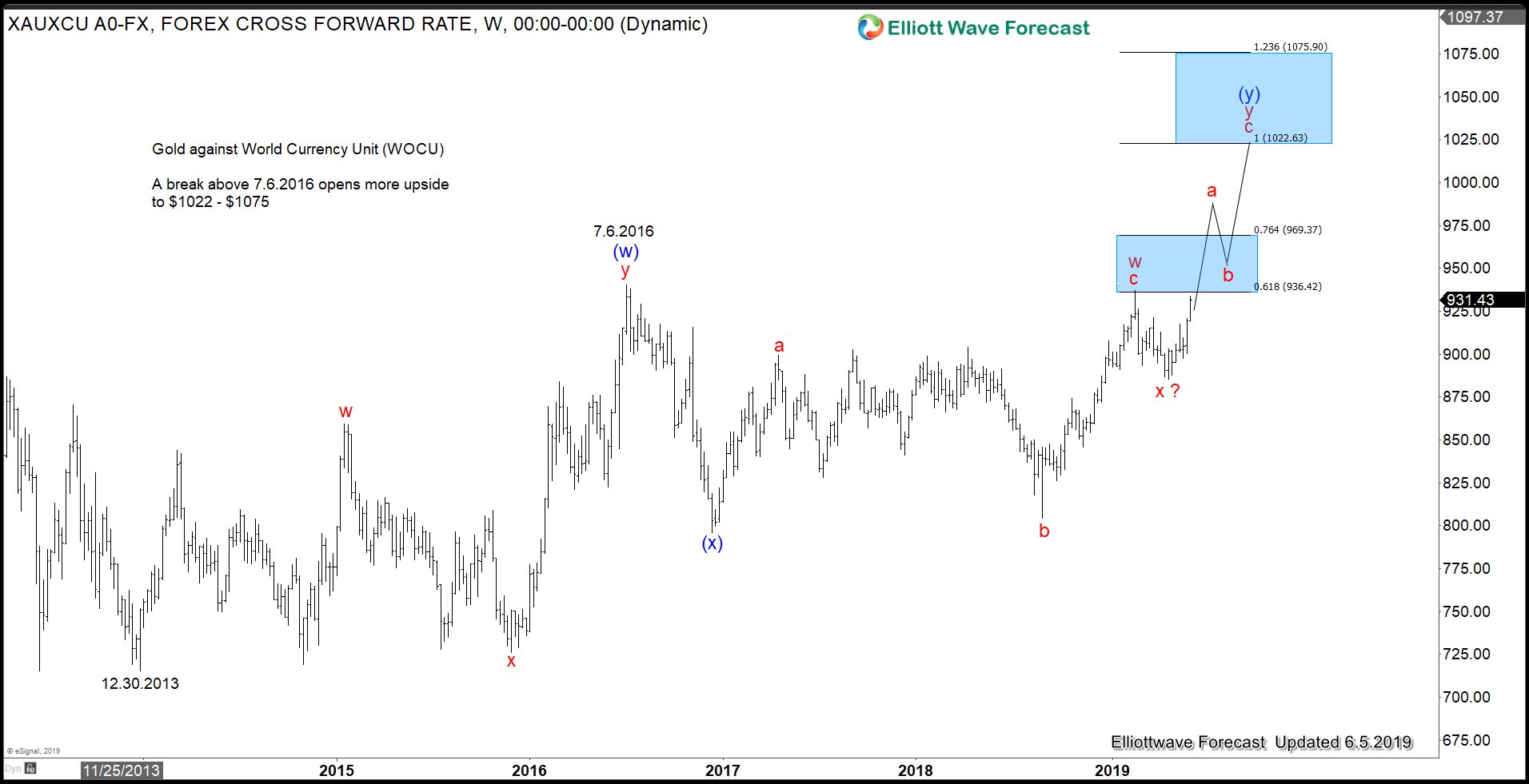 The WOCU is a standardized basket of 26 largest national economies measured by GDP. The chart above shows Gold measured against a basket of global currencies. The structure from December 30, 2013 low is unfolding as a double three Elliott Wave structure. The structure will turn bullish when it finally breaks above July 6, 2016 peak at 940.35. What this chart is saying is that Gold is strong against all the fiat currencies. With major central banks around the developed countries implementing ZIRP, NIRP, quantitative easing, it’s a matter of time before the devaluation of all the fiat currencies happen.

Please keep in mind that market is dynamic, and the view may have changed since the time of the writing. To get the latest update, you can check our service 14 days FREE.