Netlist Inc. is a designer and manufacturer of high-performance SSDs, modular memory subsystems and legacy memory products. Netlist holds a portfolio of patents in the areas of server memory, hybrid memory, storage class memory, rank multiplication and load reduction. The products are sold to enterprise and appliance customers, system builders and cloud and datacenter customers.  Founded 2000, it is headquartered in Irvine, California, US.  Investors can trade it today under the ticker $NLST on OTCQB.

The monthly chart below shows the Netlist shares $NLST traded on OTCQB. From the IPO in 2006, the stock price has developed an initial cycle higher in black wave ((I)) of grand super cycle degree towards 12.64 all-time highs in January 2007. Then, a correction lower in black wave ((II)) has unfolded as an Elliott wave zigzag pattern being 5-3-5 structure. 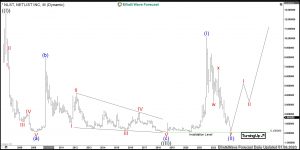 The daily chart below shows in more detail the correction within wave (II) in more detail. From the July 2021 highs $10.20, it unfolds as a double three pattern. Firstly, from the July 2021 highs, a double 3 structure in red wave x has set a low in January 2022 at 3.25. Secondly, a bounce in red wave x has printed a connector high in May 2022 at 6.65. Thirdly, the price has broken the 3.25 lows opening up a bearish sequence. Now, red wave y has been confirmed and should see more downside. However, again we see limitations of space which do not allow $NLST to extend full 100% to the downside.

Investors and traders can be looking to buy $NLST against $0.10 low using the pressure of the bearish sequence for lower prices on the one hand and the lack of space for the price drop on the other hand to enter the technology stock of Netlist. 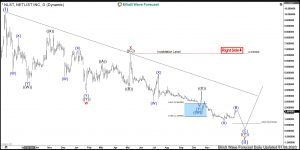 Let us discuss in a video the cycles, the wave structure, the sequences and real investment opportunities in the stock price action of the technology company Netlist ($NLST).

Get more insights about Stocks and ETFs by trying out our services 14 days . You’ll learn how to trade the market in the right side using the 3, 7 or 11 swings sequence. You will get access to our 78 instruments updated in 4 different time frames, Live Trading & Analysis Session done by our Expert Analysts every day, 24-hour chat room support and much more.