Firstly the QQQ instrument inception date was in March 1999. That was before it ended a larger cycle up from the all time lows in March 2000. The ETF instrument mirrors the price movement of the Nasdaq which did that. As shown below from the March 2000 highs the instrument experienced a steep correction lower in three swings to the October 2002 lows. From there to the October 2007 highs it ended the first of the current series of Elliott wave impulses in the black color ((1)). This makes up the subdivisions of the wave ((5)) of I that ended on in August 2018. The correction of the cycle up from the October 2002 lows ended wave II in December 2018. The pullback into the December 2018 lows was strong. It suggested it had corrected the whole cycle from the October 2002 low.

The analysis and commentary continues below the QQQ monthly chart. 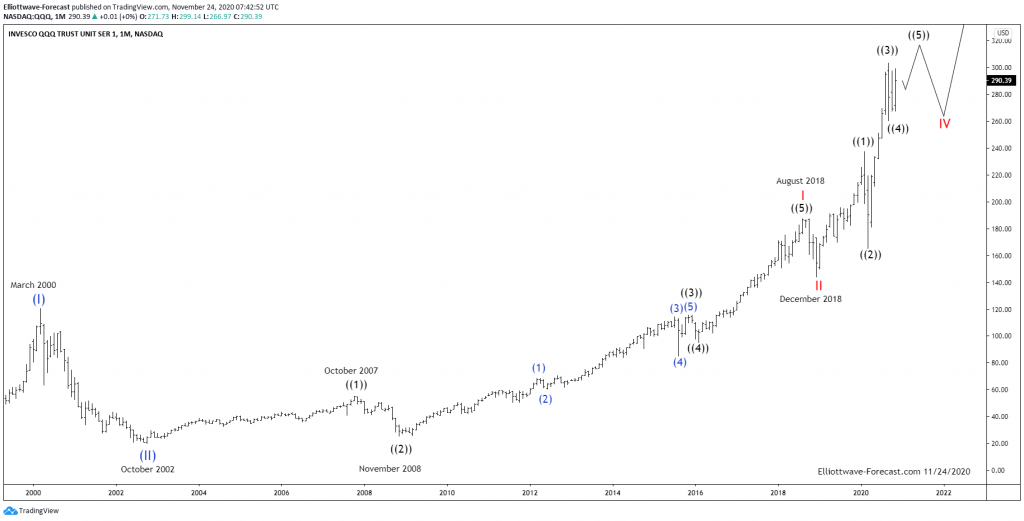 Secondly as previously suggested the QQQ instrument mirrors the Nasdaq highs & lows. As known, impulses progress in 5-9 & 13 swings. Corrections against the trend proceed in 3-7 or 11 swings. So far the bounce from the December 2018 lows appears to be three, larger degree five wave impulse sequences into the September 2020 highs at 303.50. This leaves an incomplete sequence higher.

In conclusion the instrument is bullish most immediately while above the 266.97 lows from the 2nd of November in the first degree as well as while it remains above the September 21st lows at 260.11. While above there the instrument should trade higher to a minimum target area of 313.74. While above the 9/21/20 lows it also remains plausible it can reach the wave ((5)) equals wave ((1)) area at 354.12 before it corrects the cycle up from the December 2018 lows.