Since the decline starting from year 2000, the world has been calling for a huge crash in world indices. The world indices did in fact corrected nicely in the year 2000 and 2009. The correction took the form of a FLAT Elliott wave structure and reached 50%-61.8% of the all-time rally in most of the world indices. This correction is even recorded in a movie titled “The Big Short” telling story about a group of traders shorting the market.

The crowd does not have enough with the 50%- 61.8 % correction between year 2000 and 2009, which is almost 9 years of correction. People want more and they want a crash after another crash. However, the reality is that the Market does not work that way. Most traders do not have a long career as most believe that the World Indices trend is bearish following the 2009 decline. This is a wrong bias which has cost traders billions of dollars.

The World Indices trend will always be bullish because it’s simply the Human nature. We used to live in the cave, but now we have a nice house, hotels and many other development to make our lives more comfortable. This is called progress, and by nature, we humans always will look for something better and the Indexes are a reflection of the Human progress. We understand that corrections are needed and they will always be a part of the Market. We can say that traders who shorted in 2007 – 2008 and caught the move lower got very lucky.

The World Indices ended the all-time cycle until that moment at 4.2.2000 and pullback in 7 swings into the 776 area using the $SPX as reference. By 2002, the correction has reached 50% of the all-time rally ina corrective 7 swing structure, and technically the correction was enough and a new bullish trend could develop. The World Indices even made a new high in 2007 and then crashed into a C wave completing a flat structure. Selling wave B at 2007-2008 high into wave C lower with a new high above the previous peak at 2000 is luck. Yes the move lower happened, but selling is against the trend at that time, and whoever caught that short got lucky.

It sounds and looks easy in a movie, but it is a wrong trade. It is a mass crowd trade, and we know better. We proposed “The Big Long” instead, which is more natural and easier to trade with no pain. The Index has rallied since 2009 and this rally is the good side of the Market, the one with no pain. The trend is always smoother and more natural, but most of the time the crowd does not see the trend. We do understand The Big long has reached the minimum target at 2234, if it is labelled as an ABC or a corrective sequence. However, the Market is saying more upside is possible and 3197 can still be reached if the Big Long becomes an extended Big Long.

Trading is about reading the Market and understanding the natural path and not forcing against the trend. We keep and will keep calling extension and buy into The Big long because we understand that pickers got it right one time and wrong 9 times. We would rather get it right 9 times and wrong 1 time. As we always said, nobody is 100% correct and it is impossible to be perfect, but when you trade the trend it becomes easier. The Big Short which everyone is waiting is a crowd and popular trade. The reality is that few people look the other side which is the Big long. This side is not over and can become extended Big Long. We will be doing a Free Seminar on 8.28.2017, you can register here to see and understand The Big long.

Founder and CEO of Elliottwave-Forecast.com 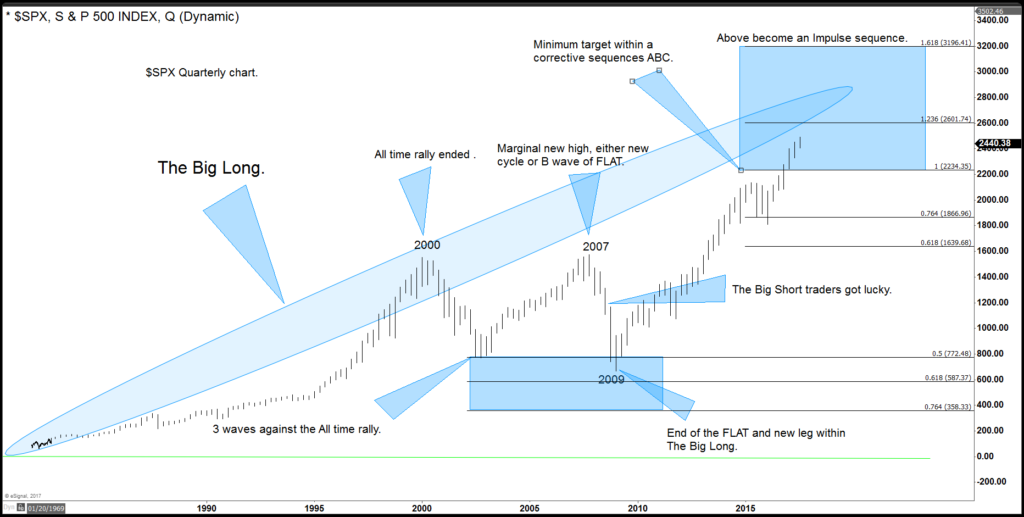 Get 2 Months for Price of 1
On all Paid Plans